There is a little boy in my class (let’s call him “David.”) David is eight and can never stop moving. During class, he is always fiddling with rulers or pencils. At lunch, he is usually running around while eating because he can’t sit still long enough to finish. He also has mastered the puppy-dog eyes that make it almost impossible for me to get upset with him when he, inevitably, runs into his classmates or knocks over desks and chairs. For a while, David was running around in shoes that were so worn through that parts of his feet were touching the ground. When school first started, he was using an old bleach bottle as a water bottle, and told me, after much prodding on my part, that the only food he ate all day was lunch at school. I don’t know much about David’s family situation. No one has ever come to school to pick up his grades or to see school concerts. What I have heard of his home life is not good, with stories of parents in the states, and David sometimes having to sleep outside. During an activity in class where we drew our families, David drew me.

I know there are millions of children in similar or worse situations. The difference for me is that I know David. I spend my days in a classroom with him, trying to teach him English when what he really needs is food and a place to sleep. Every day I teach nineteen 3rd graders, many of who come from broken families because one or more of their parents live in the US, leaving them with single parents, grandmothers or aunts and uncles. Others deal with abuse, poverty or neglect every day at home. I see how this affects them.

The hardest thing about being in Honduras is that I have fallen in love with these kids and I can’t help them. I can’t change the reality that David faces every day when he goes home from school. All I can do is try my best to teach him English in the hope that someday he will be able to get a higher paying job than he otherwise would. Then, in June, I will leave him, like most of the other adults in his life, hoping that whoever teaches him next cares and understands and makes sure he has food.

It’s hard to explain to people back home that the hardest part about being here is that no matter what I do during the day, these kids still go home to their realities. When I hug my nineteen little people goodbye every day, all I am hoping is that they come into school the next day well fed, well cared for, and well loved. Because they really are the coolest kids and that’s what they deserve. But until that happens, I’ll keep teaching them and caring and hugging them just a little bit harder. 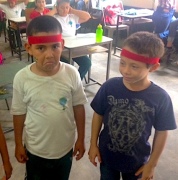 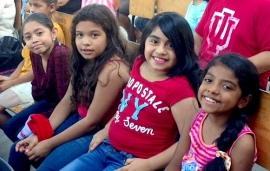