― Lewis Carroll, Through the Looking Glass

I’ve been teaching at CBS for over a year and a half now. During this time I’ve experienced my fair share of school related outings and activities. There’s the Torch Parade, Kid’s Day, the Olympics, Christmas programs, Valentine’s programs, etc. The list goes on and on! There are tons of celebrations and activities throughout the year, but my favorite by far is the trip to Wonderland. 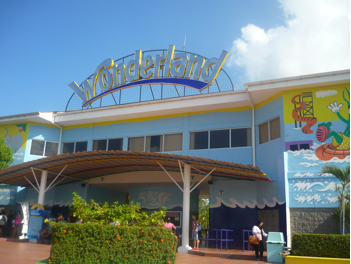 Down the rabbit hole we go…

The main reason I like this trip so much is because I get to hang out with the kids without being their teacher. All students must be accompanied by a parent, so my only job is to play with the crazy little water monsters all day! Honduras can get really, really hot and swimming pools aren’t very common, so a trip to the water park is pretty special. Many of the kids didn’t know how to swim, so there was a heavy reliance on the colorful flotadores (floats).

I spent most of my time in the shallow end playing with my first graders. It was so much fun to play with them outside of the school setting! We played bumper cars with the floats, had splashing wars, and enjoyed some super yummy shaved ice. Since we were there for about 6 hours, I brought a book along to read in my down time. Ha. Haha. I’m so silly sometimes. Down time? Really? I have no idea what I was thinking and ended up getting a whopping 10 pages read. Every time I would settle down in my chair and start reading, one of the little monsters would come up and soak me with a dripping wet hug! I would chase them into the water, play until I was tired, then go back to my chair. Repeat approximately 26x.

Did I mention we pretty much had the whole place to ourselves? Ahhh……

The park is well equipped with a lazy river, wave pool, several slides, and two ‘little kid’ pools. Since the park was so empty and is so big, everybody was pretty spread out. The older kids focused their attention on the slides while the younger ones enjoyed the smaller pools. When I wasn’t in the water, I spent most of my time seeking refuge under one of the super cool little huts because unlike the Hondurans who turn a beautiful brown when in the sun, I turn red. Very red. As the day went on this became a source of entertainment for students and parents alike. I received several laughs from the kids and many pitying looks from the parents.

“Miss Krysten. Why are you so red? I’m not red. Do you like being red?”

Err….well….how exactly do you explain pigmentation to an 8 year old? Thankfully one of the older kids responded before I could. “Miss Krysten is red because she’s a gringa!” We all had a pretty good laugh at that because of how true it is.

At school on Monday I was still pretty red and pink. Meanwhile my kids walked into class with the most beautiful, perfect, sun kissed skin you’ve ever seen. As I returned home that afternoon and applied yet another layer of lotion to my puffy red skin, I couldn’t help being more than a little bit jealous of my little water monsters.

One of the ‘little kid’ pools 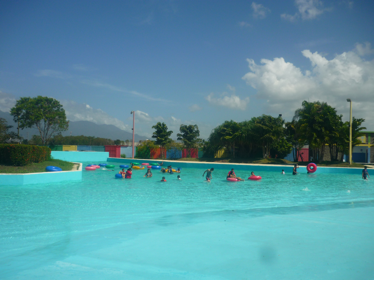 As petty as it sounds, my biggest hesitation in coming to Honduras was the possibility of encountering some serious spiders. I have arachnophobia and the idea of living in a spider-ridden country sounded like so many nightmares I have had. I have been known to try to exit a moving car due to the presence of a (small) spider, or throw a book across the room upon unexpectedly turning to a page that pictures a tarantula. I told myself that it was an unacceptable reason to not volunteer in Honduras, but even so I wondered if I would actually be able to manage.

After scouring the CBS Facebook page and website, I knew I wanted to volunteer at CBS more than I wanted to avoid monstrous spiders (at least the logical part of my brain knew it), so in an attempt at self-administered exposure therapy, I had my roommate play Discovery Channel episodes about tarantulas on her laptop while I stood clear across the room and tried not to cover my eyes.

Nonetheless, I was nowhere near being able to handle finding a tarantula under my bed or in my shoes or any of the other spider horror stories I had read about on volunteer blogs. Fortunately, the spiders have taken it pretty easy on me so far and I haven’t had too many alarming encounters with any big and hairy ones.

I am not going to make you look at nasty spider pictures, so instead here is what makes those spiders worth chancing. Without these cuties I would just be a nervous bundle of spider bait.

The other night I woke up to use the bathroom and turned my bedroom lamp on. When I walked into the hallway I spotted a large spider in the ceiling corner by the back door. I assured myself it was perfectly happy up there and would have no reason to creep into my room during the night. As I got back in bed, a black spider shot up from the side of my bed and began scrambling along the wall next to me. I jumped up and froze, waiting for its next move. I saw that it had paused on the wall behind my bed, and I tried to push my bed up against the wall to crush it. Unfortunately, I am not nearly strong enough to do that, so after throwing all of my weight into trying, the bed had barely budged and the spider had disappeared.

I spent at least 15 minutes standing in my dimly lit room contemplating whether it was worse to go looking for the spider so I could kill it, or to knowingly sleep with it right under the bed. I will admit I even considered waking up one of my housemates to help me look, but it was 3am and I wanted them to still like me in the morning. Mind you, this was not a big spider. It wasn’t one of those little ones that I can now pinch between my fingers without thinking twice, but we are not talking about a tarantula either. I was feeling brave, so I decided to search for it, something I never would have done a year ago. Before I came to Honduras, I wouldn’t even have been able to smash a small spider with my foot. So there I was at 3am, standing on a chair in my boxer shorts and combat boots, wielding a broom and thinking, this is progress. In the end, I didn’t find the spider, so I blocked all spaces between my mattress and the walls with bunched up dresses, wrapped myself in blankets, and went back to sleep. The next night I had another volunteer help me move my bed and poke around for it. He insisted that nothing was under there and left. As I got ready for bed I slipped on my pajama pants and that SAME black spider fell out one of the legs. I screamed and stomped on it and once my heart slowed down I slept so well.

I never knew just how much I rely on smiling in business exchanges. It happens less now, but I when I purchase something from the secret pulperia (a pulperia semi-hidden behind a wall) and the owner doesn’t smile, I wonder if I insulted her, was rude, or if my purchases were annoying. When she does smile, I walk down her steps content, even if she’s out of the tortillas or avocados I requested. This type of interaction repeats everywhere: the produce stands, the school supply store, and the supermercado where the clerks tend to look rather bored, though that’s probably just their resting faces. The clerks and owners are polite, but there’s no smile to accompany their Buenas/Hola or Gracias and, despite repeated exposure, I replay the interaction, looking for my offense, searching for the smile.

Articles, discussion threads, and studies about cultural differences often cite the “friendliness” or “politeness” or “smileyness” of the U.S. population (just google “culture” + “smiling”). Depending on the author, this is either praised as welcoming or disparaged as sign of the culture’s falsity. In my previous life, when I read these articles I would think of frozen-faced flight attendants as they waved me off the plane or the grumpy check-out person who definitely did not smile while helping me, the supposed British stiff upper lip or the rumor that Germans have no sense of humor … but I wouldn’t really understand what the author was talking about. People in the U.S. smile too much? Yes, some are bad at faking it, but what does “too much” mean? After all, I come from the land of smile therapy.

Now I think I understand, at least a little. As much as the disinterested facial expression causes the furrow between my brows to deepen into a canyon, why is it reasonable to expect a smile during our business transaction? I need something, s/he supplies it. Why does s/he need to appear thankful, and why do I either when it comes down to it? Does this transaction give either one of us significant pleasure? In the day-to-day, probably not. It’s about supply and demand. Let’s keep it honest and not muddle it with emotions. I find working in customer service, particularly in a store, face-to-face with customers, exhausting. I have to fake enthusiasm for a stranger and her/his purchases for 8 hours. Really, while I wish the customer no ill will, I rarely could care less. I’m there because I need money and the customer is there because s/he needs what I happen to be selling. I and the store I’m in are no more than a convenience. Yes, I’m happy to have a job and I will serve you with the courtesy you deserve as a human being, but why am I required to make it personal? Does it have something to do with the U.S. prioritizing industry and money over humanity? I’m sure there is a profit margin attached to a smile, or what appears as a smile, because a genuine smile can’t be imitated. (Accept no imitations, folks!)

Despite my burgeoning awareness, I continue to seek out the smile. I frequent the same licuado stand because the young man always smiles during our exchanges. I doubt our secret pulperia has better prices than my usual produce stand, but the young girl who occasionally helps me can be so goofy, thus I buy bananas. In the States, I will return to a store if the clerks smile, even if the prices are slightly higher. That’s my reaction to an upturn of lips or baring of teeth, but what is the reaction of someone used to a less smiley culture? A culture that doesn’t equate smiling with competency and courtesy? (There have been reams written on this topic and my question doesn’t merit notice, so I’d rather ponder and navel gaze than research at the moment.) Conversely, I am slightly more comfortable with not accompanying my Gracias with a smile if I’m not feelin’ it. I’m less afraid that I will be found rude.

Besides, smiling causes wrinkles, and who wants that? Hmm…maybe cultures that smile less are secretly obsessed with appearing youthful. No, that’s the U.S. Never mind.
(No, I really don’t care about wrinkles. Well, not much, yet.)
theresa
(7th grade English, 7th-9th grade Science)