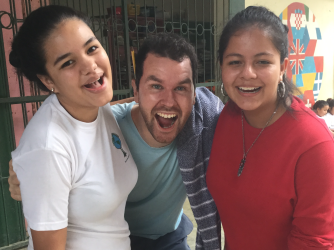 I’ve had a few rough months recently and in October I decided to move to the South of Italy to teach English, hoping it would give me a fresh start.  The job was fine and the town, just a hop, skip and jump away from Pompeii, was beautiful, but still I couldn’t quite snap out of the rut I was in.  I tried sticking it out and ended up staying for around 4 months but I began to realise in January that it wasn’t the place I needed to be.  So one day in mid-January I handed in my notice and booked a one-way flight to Honduras.  I was going back to the place I’ve spent the best, most meaningful and most enjoyable years of my life…..CBS.

I first came to CBS as a volunteer in January 2011 and had intended on staying 6 months as a stop-gap between travelling.  Within a month I’d decided to return the following year and ended up leaving 2 years later.  In those years I fell in love with the kids, the town and the country and when I eventually had to leave, it truly felt like I was leaving home.
I’ve only been back one week.  On the flight over I was nervous that it wouldn’t be the same.  I worried that things would have changed or that I’d been wearing rose-tinted glasses since I left.  Luckily all these worries were completely unfounded.  The moment I got back to the school I felt very much at home again.
The little 2nd graders I taught when I first arrived are now not-so-little 8th graders.  Some of them are about the same height as me, which was great to see, however there is a down-side since they now realise that I’m actually terrible at football and the only reason I seemed really good before was because I was triple their size!
After speaking with them I was even more excited because their English has gotten so good and we can talk in a more grown-up way.  I’m getting to know them better now as individual, young people rather than the playful kids they were before.
I have so much to thank these kids for and now I’m able to explain that to them.  I can now tell them that they helped give me the best years of my life and that they’re also the reason I fell in love with teaching and decided to pursue it as a career after I left.
Despite only being back for a week I’m glad to say that I’m well and truly out of my rut and I’ve got my mojo back.  I don’t know why I was nervous about returning because this place has always been a happy place for me.  It’s a place where I feel like I’m making a difference, a place where I’m always learning, a place that has given me relationships and friendships I’ll keep forever, a place that always gives me a great tan and, more importantly, it’s a place that always feels like home.
Most people, like I did, come to volunteer here to make a difference and help people less fortunate than themselves.  If you volunteer here, you’ll certainly be doing these things, but just remember that the kids here might end up helping you just as much as you help them.
Mr James, Master of Resource